Let me tell you something you already know. The world ain’t all sunshine and rainbows. It’s a very mean and nasty place, and I don’t care how tough you are, it will beat you to your knees and keep you there permanently if you let it. You, me, or nobody is gonna hit as hard as life. But it ain’t about how hard you hit. It’s about how hard you can get hit and keep moving forward; how much you can take and keep moving forward. That’s how winning is done! Now, if you know what you’re worth, then go out and get what you’re worth. But you gotta be willing to take the hits, and not pointing fingers saying you ain’t where you wanna be because of him, or her, or anybody. Cowards do that and that ain’t you. You’re better than that! 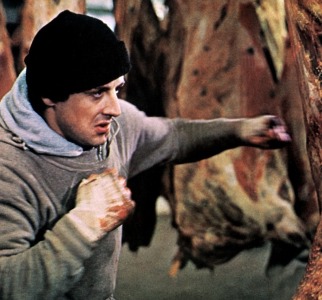 Robert “Rocky” Balboa, Sr. is the title character of the Rocky series from 1975 to 2006. The character was created and portrayed by Sylvester Stallone. Throughout the films, he is depicted as an everyman who started out by going the distance and overcoming obstacles that had occurred in his life and career as a professional boxer. This character is among one of Stallone’s best known characters and is often considered the role that started his film career..