What can be considered as the “black” code?

Imagine, you’re playing mafia game as a citizen. And all of a sudden many other players blame you and are going to vote you off. How to avoid that? How to make other citizens to believe you?

When do usually citizens start suspecting other players as black ones?

1) When the player blames one player, but without any explanation nominates another one.

2) When the player relying on his intuition, is making a tough move. The tough move is called the strong blaming and nomination of a player. Remember: a tough move can only be made by the Sheriff if he found a black player, or a black player who wants to eliminate the red player, and then reveal themselves as the false Sheriff. You are none of them. Remember: do not ever make a tough move, relying only on your intuition. The real Sheriff will lose one night for checking you, because they will concider your behavior as suspicious.

As for your progress for the second round, nominate player who seemed suspicious to you. And be very reasonable while doing that.

Nominate player in a delicate form. Mention, that you will not necessarily vote against him, and make the final decision, after hearing all. Nomination in the second round is not a dogma in our English speaking club in Kiev, and you can nominate no one, but what to wait for? If only black players nominate others, a red player will leave the game that day. At least tell something to have some English practice at the end of the day! 🙂 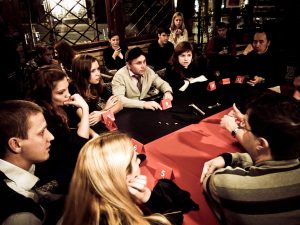 Remember: on the second round there is a lack of information for a red player to make a right decision. You or other citizens can make a mistake. We all do them from time to time. So it shouldn’t be considered as a back move.

During the voting don’t put your hand on the table very fast, wait a bit, as “black” players can join you if you vote against the red player. If it is possible, try to split the table, in other words, try to make two or more players get the same amount of votes. This will give you another opportunity to hear them once again and orient during the second voting.

On the second round there possible two options of discussion: when the tough moves were made, and when they weren’t. In any case, the tactic of a red citizen playing, should be based on the principle of balance (eliminating players from different teams). If the player from one team was eliminated, the next day player from the opposite team should leave the game. This is the only guaranteed way to continue the game as one black player will leave the game for sure.

During the second round, the tough move has been made.

Let’s consider, the move was made by the Sheriff or a “black” player, who is going to eliminate the red player and then reveal himself as a false Sheriff.

If the move was made by the real Sheriff, most likely he will be shot during upcoming night.

How to react on the tough move?

Alternatively, you can vote with a player who made the tough move. If the move was made by the Sheriff, most likely at night he will eliminated by mafia. In the best case, he will find another “black” player and leave the team in a “gable game” (it is when 3-4 players are left at the table, none of which has been checked; if everyone has good speeches, citizens do not know who suspect and just try to guess like at the gamble).

Why in the “gamble game”? Because the remaining “black” player has not made any “black” move, that could help to find them. Together with the Sheriff, they eliminated one “black” player. After the Sheriff leaves they will vote against the second checked “black” player. It could be extremely hard and nearly impossible to find the third one. We can only guess.

That’s why, if the game is played correctly, Sheriff does not reveal themselves, and you, as an option, are voting along with the player, who made a tough move. The second “red” player will be eliminated. Mafia will kill the third player at night, but the critical situation will be just conditional. Why? Because the player, who made a tough move, will leave the game in accordance with the principle of balance, and the game will continue.