Some of you may have a question in mind: “How can I learn English and improve my public speaking skills in one time?” We have a suggestion for you how to hit that target: visit ArtTalkers Club. It’s a nice English speaking club in Kiev from the worldwide Toastmasters Organization. Below, you can find a speech masterpiece they prepared for your consideration. Hope, you’ll find the following letter useful and interesting. They hold meetings every Saturday in some cozy cafe starting from 11am. You can usually see their event announcements here. Their meetings are structured in a way, so you’ll be able to see a number of speakers and even can end up in a situation, so you’ll be asked to give a impromptu speech. The community is friendly enough, so if you start speaking with lots of mistakes – they won’t give you a hard time. You’ll just get a list of valuable suggestions how to improve your public speaking skills n English.

I believe if you are going to join one of our mafia game events – probably, additional English practice at ArtTalkers Toastmasters Club Kiev won’t be harmful.

Ryan Avery, “Trust is a must” 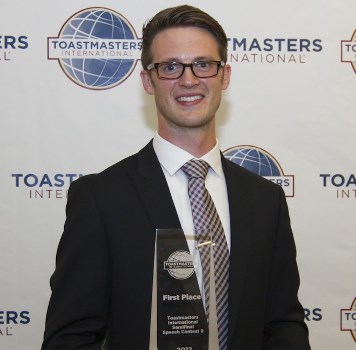 Toastmasters World Championship contest for The Best speaker in 2012. Ryan took the 1st place in it.

Ryan Avery is an actor in his every move, word and pause. His “Trust is a must” speech is a strong example for projects No. 4 “How to say it”, No. 5 “Your body speaks, No. 6 “Vocal Variety”. Ryan Avery has used a tool, which Toastmasters Ukraine had already tested previously in contests, to impress the audience. Making a proposal to marry him at the stage is a lifetime event and an impressive trick. Though, it’s better to watch how he performed, there are still couple of conclusions to make about this funny and entertaining speech.

Things to notice:
Slim structure – Ryan starts with question at the beginning, explains what the question is about and answers the questions in the conclusion – single line;
Refers to the audience to as “Anybody who lied their moms”, leaving rare people in audience not involved;
Makes laugh at himself, as a “non-macho”;
Starts with “Times has changed” unexpectedly about not serious things – seven pounds of cigarette butts, but not five pounds;
Explains his girl’s advantage with a magic number “Four”;
The deep and powerful words, told to the parents of his girlfriend: “I will love that girl when her curls turn grey”.
Here is the link to the Speech: http://youtu.be/ReE7-X70iPU