There exist many forms of intellectual Mafia game at least in Kiev. Most people played the homegrown-type Mafia game without any specific regulations. In such rules, citizens usually lose. In this article we will shed light on how to play mafia under the so-called “classical” rules.

What are the peculiarities of «classical» Mafia rules?

To make a long story short, I must admit that the rules are very simple and regulated.

Here are the key features:

2) There are only two teams: the blacks (mafia) and the reds (peaceful citizens).

3) No other roles are used in the game, such as the Doctor, the Maniac, the Prostitute and so on.

4) After some players leave the game, their roles are not announced to the table. It means that moderator tells who was who only after the game is finished.

5) During a day each player has one minute for a speech. Players give their speeches one by one in their turn. The common discussion is not allowed. Those who say even one word out of turn will receive penalty.

6) Penalties in the game. If a player receives three players, they doesn’t have a right to speak during the next circle. For the fourth penalty player will be disqualified from the game.

7) At night Mafia shoots at citizens with the closed eyes.

How is it possible to play Mafia with such a rule? It’s simple: at the beginning of the game, during the zero night, all mafia members wake up and agree on a strategy for the game. Usually the Don of the Mafia shows the order with the gestures – who will be killed and when. For example, the 1st night will be killed Player 5, the second – 6, the third – 9. After the zero night, the first day comes, when players try to figure out who is who and listen to the first speeches, usually no one is eliminated on the 1st day.

When the first night comes, the Moderator loudly and clearly starts counting players from 1 to 10. All mafia team sits with their eyes closed. They have to make a special gesture to the player number 5 simultaneously (because in our example, player number five was ordered for the first night). After all mafia players make the shooting gesture at the same time at player 5, he or she will be considered as killed. If during the countdown someone from the black team makes a special gesture in the wrong time, player will not be killed, mafia will miss, and no one will “die”.

8) After shooting the Don of Mafia and the Sheriff look for their opponents one after another.

Even if the Don found the Sheriff or vice verse – it does not mean that they kill each other. This is only information exchange with the Moderator. And it’s up to players what they will do with this information. Recommendations on strategies how the Sheriff or the Don should behave in the mafia game, you can read here: https://englishmafiaclub.com/mafia-strategy.html

10) When the morning comes, the killed player is the first to speak.

Even if mafia killed player number 1 at night, in the morning he will speak the first in any case. All players have their last speech before leaving the table.

11) If the player was eliminated from the game, he has to leave the table and stand aside.

This is a very important matter. A person, who was eliminated, should stand aside and become a silent spectator with inscrutable face. If the player stays at the table, he will have a feeling that he is still in the game. Because of this he can influence the game with his mimics or gestures. 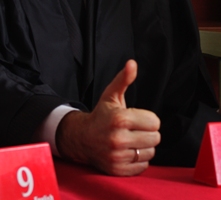 12) Well-regulated and a “corruption free” voting.

The Moderator announces: «Who is against player 9 – vote!». And players have maximum 2 seconds to put their hand with “OK” gesture on the table. In 2 seconds the Moderator says “Thank you”, which means the end of voting against this player. If somebody adds his vote after the phrase “Thank you” it will not be count. Nevertheless, players whose votes were not count can participate in voting against other players.

At the beginning many people think that these rules are “boring and too complicated”. Newcomers, coming to Mafia club to play in English, often say something like: ”Why mafia team has a hard time shooting if they can simply wake up every night?”, “why doesn’t the Moderator just announce the roles of those players who left the table?”or “why there is no Maniac and Doctor?”. Usually such kind of questions come from the players with little experience in the intellectual Mafia game.

Only «classic rules» contributes the greatest number of different strategies. No other rules of the Mafia game can guarantee such a strong development of logical thinking. Therefore, if you want more fun and improve your ability to think logically and strategically, assessing the actions of people and groups a few steps forward, then we definitely recommend these rules for playing Mafia!