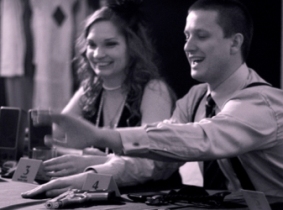 Many people come to play Mafia in our English speaking club in Kiev for emotional release. So there are rules when the game has no logic. Actually, this is what we are going to tell you about in the article.

You already know the main scenario of the game, and probably wonder what are those special differences of the illogical and fun Mafia are?

This game is about chaos!

Besides mafia and citizens’ team, there can be extra characters, such as “the Maniac”, “the Doctor”, and the others. I don’t see any sense to tell about the “others”, such as “the Prostitute”, because she “kills” players by infecting them with AIDS. Don’t even want to think about such a scenario, that is why I don’t use this character in our Mafia club in Kiev.

So, the first night – night of murders. The “Blacks” (mafia team) shoots as usual. Then the Don looks for the Sheriff and vice verse. But wait! There is more…

The Maniac wakes up. He lets the moderator know which player will die this night, pointing on him. The Maniac may kill whoever he wants. Basically, he doesn’t really care, who will die, because he doesn’t belong to any team. He plays alone and his aim is to be the last player at the table.

There exist such rules, when the Maniac plays with the red or black team. As for me, it doesn’t make sense. The Maniac is an antisocial creature and should not join any group.

The Doctor wakes up and shows the number of the player he cures. It is clear that the Doctor belongs to the read team. This character can cure whoever he wants. But there is a nuance: he is allowed to cure himself only twice during the game. The Doctor also can’t cure anybody two times in a row. The Doctor’s goal: to save the lives of the citizens.

Usually, when the Doctor cures a player, he does not know the role of the “patient”. Therefore, a funny situation often happens when he saves a black player’s life while Mafia actually kills the Doctor the same night.

So, after all of this nightmare, city wakes up and the Moderator announces the results of the night: two victims, as a rule.

Why such a game is game is called funny and illogical?

Well, imagine the morning after the night. Suppose the Doctor cured a player, who no one had tried to kill. It turns out that the Moderator announces two victims: one was killed by mafia; another one – by the Maniac. You have no idea who killed whom. Even if there is only one victim there will be questions:

Funny, isn’t it? Half of the players have some role. They sit with a satisfied smile on their faces, enjoying their power in the game. There is almost no logic in the game, but all Mafia newcomers are happy! 🙂

How to play Mafia with 13 players?

There are moderators, who let 16 or 20 people to participate in the game. But in such game when the daytime ends – you don’t remember what the 1st speaker was talking about. Plus, the game could last for hours. So, I’d recommend having no more than 13 players.

When the Mafia game can be finished?

This is a very interesting question…. Peaceful citizens have to kill all mafia players AND THE MANIAC. While Mafia team, first of all has to GET RID OF THE MANIAC. Then the blacks need to equalize the number of players between citizens and mafia. 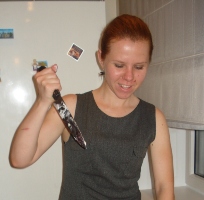 For instance: there has left 3 mafia and 3 citizens (the Maniac already left). This is the “Blacks” victory. If there has left, let’s say, 2 mafia players and three reds, the game continues.

Till the Maniac is alive – the game continues.

The Maniac wins when he stays face to face with one citizen OR one mafia. If he stays with mafia only, victory will be shared by the Maniac and the Black team.

English Mafia Club plays under these rules very seldom. You’re asking why? Our visitors come not just to have fun but to practice English. Our audience likes more intelligent kinds of leisure. And for such goal, classic Mafia rules are more suitable. Ultimately, the game gets not only very funny, but also useful for the brain.

Wish you to have good games!