Once, the frequent client canceled a planned Mafia event, saying that he had an unexpected business trip. It turned out that for him it was important to be present at all office Mafia events in order to observe his employees. It seemed curious to me. Strictly speaking, I am going to share this experience of studying your staff in this article.

I have held several of Mafia events for “Express Media” company. All of them took place on a Friday evenings, at the end of a working day, for a group of 10 – 12 people (including the director). We usually gathered in the meeting room and played for about 3 – 5 hours, fully enjoying  intellectual “murders”. The atmosphere was friendly. Besides frequent players, people often invited or their couples, or sometimes clients and partners of the company, which made the event more interesting and games much more exciting because long-time friends are revealed in a new way.

In my humble opinion playing Mafia you can develop your negotiation skills with different types of people, leadership qualities and ability to read body language. Therefore, I thought that Alexander was going to tell me something similar but he didn’t. The reality find out a little different.

It’s not a secret that the majority of Mafia players don’t like to get a black card i.e. to belong to mafia team, to “kill” other players and to decide the fates of the Citizens. Players often can reveal themselves after getting disliked card. Afterwards you might notice that they aren’t interested in the game and don’t feel comfortable. You can see that they are not interested the game, uncomfortable and it can be evident. They also are less active in non-verbal dialogues and generally behave themselves passively.

Would you like to know Alexander’s “diagnosis” in this case?

In his opinion, mafia card is just a role in the game when you must do something that others don’t like, but it has to be done nonetheless. Somebody has to be Mafia and do its “dirty” business. It could be in reallife. For example, an office manager who’s duty is to give weekly reports on the employees that come late for work. And as a result of her reports is the fines for those who’re regularly late. A system administrator, apart from his other duties has to inform about employees who spend too much time on websites irrelevant to their job. In both cases, it’s part of theirs duties and for which they get salary. Any job has its pluses and minuses. Thus, some duties can be compared to a black card in Mafia game. Now the consequence of the game could be the following: a “nice” office manager is no longer “tortured” with reports on latecomers, while “ruthless” system administrator installed a software that monitors employees’ on-line activity without human interaction. Therefore, with a few simple steps negative work aspects of one person turned into positive ones for another.

“I am red and the black are the enemies”

There’s a category of players, who, while playing Citizens may sometimes behave themselves strange (aggressive or arrogant) towards the tried “black” players, as if they were real criminals. Especially if there’s something personal going on. During the game you can see who doesn’t like someone. Some conflicts can be easily solved after a discussion of the issue with each of them separately. However, as Alexander said: “I’m rather an entrepreneur not a psychoterapist, therefore if no compromise can be reached, I try to separate these people in the working environment. And if that doesn’t help, a new vacancy appears on our website shortly”.

It’s quite obvious that the Citizen who was “killed” during the first night plays the less and leaves the table after about ten minutes and goes to the auditorium. It’s interesting that there’s a particular category of people, who can’t take it easy. On the contrary they beging to resent, to find out who dared the “order” of the first night, and bring many arguments why it shouldn’t have been done.

Alexander affirm that such people are or megalomaniacs or have overpriced self-rating.  And, then more person resents, then worse syndrome is and the stronest desease has. It’s hard to solve this problem, but at least understanding such things explains some reasons of the conflict situations in the team. The conclusion is simple – if there is a crown on his head, it may be better to part with such colleague. Though, the Mafia game helped to find out a star fever of the employee, whose probationary period ended on the following working day. “It does not mean that we’re nontolerante to the “stars”, but in that particular case it was the best decision for everyone”

“Victory at all costs (I always want to win)”

Mafia game  is a very exciting process and experienced players knows that they can get a positive filling and enjoy the game in spite of to lose the game whith their team. But there are someone who can’t lose. You can see them at once. It’s fine to be competitive and try to win but  within reasonable limits. Such players are often more exacting to others and they always have many arguments why someone didn’t  right. Their own mistakes they admit only in a stalemate.

According to Alexander this syndrome is extremely useful for salesepeople, but in the management you should be careful with it. This feature of the employees should be considered especially in the teamwork or collaborative projects. 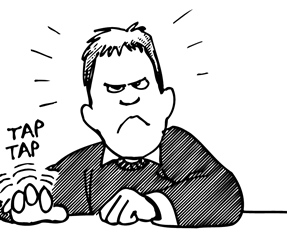 Playing Mafia you can see impatient people at once, who quickly lose control over emotions. I should say that game rules vary from club to club. For example, I allow babbling in Mafia (when all participants can talk at the same time) only at special order on corporate Mafia event. Usually, when “day” has come, each player has 60 seconds to prove his or her point of view. Other players listen silently with respect.

Very often impatient players do not follow these rules getting penalty. Alexander told that he found out few of such employees, with functional responcibilities  fortunately didn’t suffer of their specific character. However, there were employees who couldn’t make deals with clients due to their impatience. Fortunately, most of the staff can be trained and taught. Several private conversations in a friendly atmosphere plus a few months of self-improvement (during Mafia games as well) gave great results and an employee was making deals at a new level, with required patience.

According to Alexander opinion, Mafia is a great way to get information about informal leaders. Besides, the game environment ideal contributes to this. Quite unexpectedly, two ordinary employees became the great players. They brilliantly performed roles of “Citizens” and “Mafia” because they had an ability to “lead the crowd”. I should said that success in Mafia can influence  on their success in career within the company.

This is the most innocent of all “sins” mentioned above. In general, Mafia is a logical game, where it’s important to analyze, understand the cause-effect relationships and foresee people’s actions. But, often the strategic tricks of players are such masterly that breaks any logical conclusions. That’s why playing Mafia you will need not only logical thinking but also acting skills, intuition and thinking out of the box. It be a catastrophe for logical people if the game went the way of feelings and emotions. “It’s not logical!” – would be their main point. Whereas a non-logical strategy turns right, they shake ahead and tells that opponents were just lucky. In the company, which I tell about, full-logic thinking were almost every analysts and programmers, which is not surprising. I sincerely hope that playing Mafia was useful for them and they pay tribute to the creative and intuitive thinking, which does not always obey the logic.

I did not expected that Mafia will help to find out the typical workaholics! Such employees feel uncomfortable or even guilty when they have an urgent work and they don’t do it. As it was said before, the players drop out from the game one by one and join to the auditorium watching the process. So, the workaholics dropping out the game, go back to their workplace and keep finishing endless “urgent tasks” before the next game starts.

There are two teams in Mafia – “Citizens” and “Mafia”. That’s why “Mafia” is a team game. There are very important team-building skills, the ability to feel and understand the team, follow a common strategy. This is why Mafia can easily detect “loners”, but not necessary egoists. Quite often, these people put their point of view above the view of their team. They feel much more comfortable to be responsible for their own actions. Just imagine if such person could be a manager!

The next category, which still should bedistinguish is “Excellent students”. They have a great desire to win, but even more they want to have everything done according to the rules. They are demanding to themselves and to the others all the same. Sometimes it’s good, sometimes it can ended with an arguments. In fact, syndrom of “exellent student” is similar to the inability to lose. Although, the accent here is exactly on the correct process, not on the result. And if, for example, to a common accountant, it can be almost one of the most important conditions then, the chief accountant should be more flexible and able to look for alternative creative solutions, which will not evade the law and will save costs for the company instead. “Excellent ” would probably do everything according to the letter of the law: and if your business in Ukraine, you will work just for taxes only with such idealists …

Experienced Mafia players know that in order to win you have to plan and predict, as the situation can change dramatically at any moment. Scaremonger, though, often give up and become upset making mistakes. Especially, if the Mafia missed. Later, when they analyze the game they realize that they had a chance, but the opportunity was lost. The remedy to this behavior is practice of negotiations. You can practice on real clients and lost orders or you can practise just play Mafia. Do as you like!

As a conclusion, Alexander said that the most valuable aspect of the game is that nobody from the staff suspected that they were observed. A corporate Mafia game in the office of your company is a great opportunity to see your colleagues in a different side sometimes even in a stressful situation.

Of course, Alexander and I do not claim to ultimate truth. But the profession business Mafia game can help studing  and develope people whom you have to work with and do business together. As Shakespeare said:

“All the world’s a stage,

And all the men and women merely players;

They have their exits and their entrances;

And one man in his time plays many parts”