During Mafia game, there could be a suggestion to eliminate the second sheriff according to the balance rule. This suggestion can be made by either a Mafia member or a citizen. In this article, we will tell you how to be wise enough to see that difference. 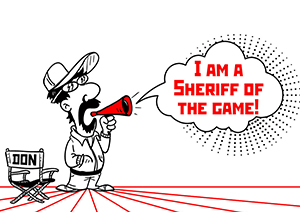 The balance rule implies that players from opposite teams get excluded from the game one by one.

When does a red team should kill the second Sheriff?

So, if you are a citizen, this situation is a no-brainer. You simply vote off the remaining Sheriff and it will be a guarantee that the game continues.  In most cases, both Sheriffs play in different teams. The City doesn’t know who the real one is. So, as the citizen what you really want in this case is to see both sheriffs to be eliminated, regardless what those sheriffs say. You simply make sure that a majority of people vote against one sheriff during one day and again another majority of people vote against the other sheriff at the other day. Meantime, you listen, of course, what people say and how exactly they vote.

Another case we often witness in our English Mafia Club, when it is necessary to vote against the second Sheriff:

Both Sheriffs had only red checks. The City agreed to vote against player #1;

As a citizen, you do not know who the right one is.

This case is also the no-brainer. If you voted off Player #1 during the third day, you simply should vote against player #10 during the fourth day. And it doesn’t really matter whether player #1 or player #5 was Mafia. On the fourth day there are usually 5 players at the table. So, if you follow this suggestion again, you will have a guarantee that the game continues, even if you eliminate a red player.

Here is some extra argument for you: if players #1 and #5 were citizens, you would have lost the game on the third day. However, since the game went on, either player #5 or #1 were Mafia. If that is the case, there are 2 black players at the table left. So, it is the time to eliminate player #10.

How does Mafia like to manipulate the Balance Rule?

Let’s consider the situation described above and analyze it from the Mafia point of view. Now, how can you recognize those manipulations of the balance rule by Mafia?

Let us go back to our example. Player #5 was eliminated during the first vote (usually it’s the second day of the game). Assume that player #10 was very much against player #5 during that second day. Then, during the second night payer #10 got killed by Mafia using the self-shooting strategy.  Of course, player #10 will reveal himself as a false sheriff during his/her morning last speech on the third day. He/she will claim that player #5 was the black player and will give a suggestion to eliminate player #1 according to the balance. That is the great example of Mafia thinking. Why?

Well, an experienced red player like you (since you are still reading this post) should realize that the balance rule is already covered, because two players (player #5 and #10) have already left the game. You have a guarantee that player #5 and #10 were in different teams and both of the representatives of those teams are out of the game. So, the balance rule is already covered, because one black player for sure has left the game. Such situation is not critical anymore for this particular day. In such case, only Mafia member or very inexperienced citizen would suggest to eliminate player #1 as the balance rule.

Player #5 was voted off during the first vote (the second day).

Now, player #1 and #10 reveal themselves on the third day and both of them give only red checks. Let’s imagine that player #1 is the real Sheriff and player #10 is the false Sheriff.

In this case, player #10 should convince the City that player #5 was red.

That should be the reason why the City has to vote against payer #1, instead of player #10 this day. Using such strategy Mafia can win with 3 Mafia players at the table. If this strategy fails, player #10 will have to explain the situation concerning player #5, justify himself/herself and blame the members of the Mafia team because he/she will be suspicious for the City.

Finally, there is a short summary: divide the table into 2 teams and count how many participants from each team left the game. The players from the opposite teams have to be eliminated one by one and this approach will ensure the continuation of the game.