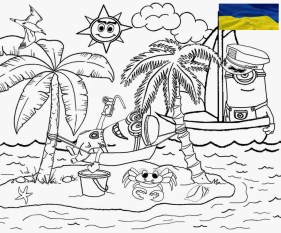 A very good friend of mine from a well-developed country often says: “Ukraine is a paradise on Earth. I want not only to live there but retire as well”. Many people will be surprised to hear that. However, there is nothing surprising in this statement. I’ve talked to hundreds, if not thousands of male expats and tourists in Kiev who provide sound explanation of WHY they love this place so much…

So, let us look closely to the most popular three reasons for Ukraine being a paradise for the foreigners:

Of course, you might doubt the credibility of the mentioned above points, but let me explain you why I am so confident in their legitimacy. I’ve been running an English speaking club for 4,5 years already. I’ve visited almost all English speaking communities in Kiev during 2010-2012. Many of the foreigners found some of our events and approached me introducing themselves. In general I’ve talked to citizens from approximately 50 countries. And most of them have the same opinion of why they consider Ukraine a paradise on Earth. So let’s take a closer look at each of the reasons they give…

To my surprise, I found out that you couldn’t go out or have a drink in a bar after 9pm or, in some developed countries, even after 7pm during weekdays. You can easily hear something like: “I’m from Switzerland (or Germany, or Denmark, you name it…) and sometimes I want to commit a suicide, because it’s bloody hell boring to live here!”

I’m personally not a fan of a nightlife. Even a late dinner in a restaurant is something I’d prefer to avoid. But that’s probably because I got fed up with all that during my University years.

The fact that you can go to a pub or club in Kiev on MONDAY evening and find it full of people, makes Ukraine quite an unusual state in comparison with those “boring” countries.

That’s an interesting part. Many Ukrainians (not all, of course, but majority) have a very special attitude towards foreigners from developed countries. They often respect them even more than they would respect some fellow Ukrainians. For example, if you go to Language Exchange Club – you can see multiple tables with people who have a conversation with each other. The biggest one will always include a foreigner. And all the attention at that table will be drawn to… guess whom? Of course, to a foreigner.

So, in Ukraine most of the foreigners will usually get more attention from the public than in their own country or any other foreign state. Of course, those tourists, who are not “loosers” at home won’t be that desperate to get that special attitude and attention. But it never hurts to feel special among people, does it? 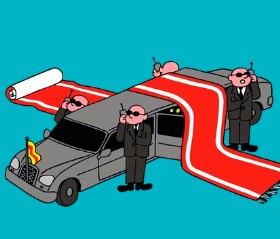 And, please, don’t think that all the foreigners are considered to be interesting people by Ukrainians. Sadly, we still haven’t recovered from the Soviet Union mentality. One of the consequences is that we still have racism in our blood. Many of us don’t like Chinese, black people and Arabs no matter where they come from. I used to be the same when I came to Kiev in 2003. But then I got to know many people from all over the world, including Asia, Middle-East and Africa. And my racism has almost disappeared. It took me just 10 years to get there…

I remember a guy from Nigeria, who turned out to be more interesting and educated guy than many of my fellow Ukrainians or other foreigners I’d known by that moment.

So, if you are white, have a European appearance and a passport of a developed country – you will feel like VIP here in terms of social status.

Lots of attention from great women

That’s a logical outcome of having a special social status in Ukraine. Well, here are some facts to think about:

4 out of 5 foreigners say that Ukrainian women are the most beautiful in the world. They rate this statement as a top 1 thing they remember about our country.

We have approximately 118 women per 100 men (probably after current war with Russia it will become even less in many regions). And many of our men, by the way, will never give a lady the same attention and care, that a French,  Spanish or Italian guy would give. So, the competition per one wonderful woman is way too lower here than, let’s say, in Germany.

Imagine yourself as an average worker somewhere in Europe. Suppose, you never had enough money and never was smart and handsome enough to get an attention from a model-type lady. Moreover, in many countries society accuses men, who date much younger ladies. That means if you turn 40 you will have a hard time dating a girl of 25 years old in your hometown.

But! As soon as you come to a magic country like Ukraine you can get a young good looking woman as a girlfriend in less than a week. She will be happy to live a housewife style of life and will treat you like a king. Sounds like a girl from a paradise! But she will be just an ordinary Ukrainian. And of course, most likely you’ll also treat her like a princess. So, in this “marriage made in heaven” all parties may be happy. A current situation forces Ukrainian men to become more competitive. And that’s always good, to my mind.

Ukrainian women are less feminist then in US, for example. That’s definitely a benefit for most men. Especially, if you got fed up with that crazy sexual harassment stuff. And let’s face it: it’s cool to say that a girl has a nice body without getting penalized for that.

Unfortunately, for a foreigner (even if they’re 55 years old) our young girls are easy to pick up. I have seen tons of cases, but I don’t want to extend this shameful topic… It’s just a sad fact, a reality which many expats and tourists use for their benefit.

Also, Ukraine isn’t the best and safest place to live in. For that reason, many of our ladies want to get married with a foreigner in order to leave our wonderful country forever. That’s also a sad fact, but it is the reality of 2014.

Summarizing all of that: imagine a low-class foreigner, who came to Kiev. At home he can’t afford any luxury, but here, for a half of his salary he can live in a 3 room flat near the city center, go out every night pretending rich and get home every morning with a gorgeous lady. Then, he can marry a girl that he wouldn’t even dream of in his own country. So, tell me now: is Ukraine hell or heaven for many foreign men?